Share
In Japan, some are blessed with friends, coworkers even a community that is able to set you up or at least invite you to places where you can meet people. For the unlucky ones, that don’t have those connections or don’t particularly want to date people in their network of friends, it can be incredibly hard meeting Japanese girls. Let’s say that you also don’t particularly fancy picking up random chicks in bars and clubs too. This is where ‘Crazy Japan’ has done it again and created a very new way of meeting Japanese girls. Today let's talk about the very popular ‘Aiseki-ya’ restaurants.

What is an Aiseki-ya Restaurant?

‘Aiseki’ is directly translated as ‘sharing a table’ and at an Aiseki-ya restaurant, this is exactly what you do. It is a normal izakaya-type restaurant but with a system that matches random groups of guys with girls at one table, to eat and chat for a certain amount of time. Guys pay per hour, while girls are completely free and you usually have to come in at least a pair. This new ‘Aiseki-ya’ system of meeting and mingling with strangers in a restaurant is said to have come about from the combination of two concepts. The first coming from ‘Aiseki’ which originally had no connotation to dating. It is a situation in which restaurants would ask customers to share tables in peak hours to minimize wait times. The second was the group dating party concept or ‘Gokon’. This hybrid concept was introduced a few years back, and originally it didn’t take off due to its shady image. But recently you can find them more prominent in restaurant/bar areas all over Japan. The most famous Aiseki-ya restaurant is the Aisekiya-Konkatsu Ouen Sakaba franchise with more than 70 restaurants across Japan. There are also much smaller and non-franchise restaurants that provide different services. Such as a higher quality menu and bars that allow individuals to come alone.

The Costs Involved in an Aiseki-ya

As stated above, the girls are completely free and the guys do all the paying. The cost varies depending on the restaurant. To give you an idea, it is on average about ¥1,500 for 30 minutes of all-you-can-eat and drink. Then an extra ¥500 yen for every 10 minutes you choose to extend. The menu includes all the standard restaurant drinks and alcohol and typical izakaya food. You will find a menu of fried nibbles and small dishes such as yakisoba and takoyaki. (Any proper dish may include an extra charge so be careful if you are on a budget). During peak hour sometimes you might have to wait for a table or for your group of girls to be matched and seated. So, some places will charge only ¥500 per drink during this ‘waiting time’ if you want to get the alcohol flowing beforehand. The real charge only starts when your matched group of girls are seated in front of you. Warning: Some places may also have a table charge of about ¥1000!

Meeting Girls for the First Time

When you first walk into the restaurant the staff will explain the system and charges. If your Japanese is good enough you could even swiftly let them know what kind of girls you are interested in meeting. Then, depending on how busy the place is, you will be faced with two different situations. 1) Your matched girls will be sitting at your table first 2) You will sit down in an empty booth and wait for your matches If you end up with situation 2, and if the restaurant is a little busy, it can be a bit of a grueling wait. When your matched girls are seated at your table your time starts. In some places, the staff may facilitate the ‘kanpai’ (cheers) for you. But from then on you are on your own and have to turn your game on. Assuming you get through self-introductions and what-not, if you find it hard to keep a conversation, there are some party/drinking games like Uno and Crocodile Dentist to rely on. They will help to deal with any awkward silences. If things really don’t click with your matches don’t worry because you can ask to have your matched girls ‘changed’ just by letting one of the staff know. Once again this depends on the restaurant. As an example, some places may only let you change after you have spent 30 minutes with the group. Others may even provide a ‘change’ card which you can just give to the staff without having to say anything. If things are going well you can extend your time, get the girls numbers and bail or invite them out to a second round of drinks elsewhere. Like I said, once the staff has set you guys up, the rest is up to you.

The Pros of an Aiseki-ya Restaurant

1) Meeting Japanese girls with the least amount of effort Meeting random Japanese girls always requires some sort of effort on your part right? A group date ‘Gokon’, a blind date with a friend’s friend, hitting on girls in a club, trying to woo a girl from a kyabakura... Sometimes it can really be troublesome, especially when things don’t go your way. When you think about it, an Aiseki-ya requires probably the least amount of effort and energy. Everything is set up for you by the restaurant with literally no preparation involved. (Maybe just picking out a nice shirt or something). If you have a bit of free time you can easily wander into the restaurant. You will have a bunch of girls in front of you in a flash. To put things into a little bit more perspective.

You have to get a friend to set you up, or worst case scenario you are the one that has to try and find bros to come to fill numbers. Usually, you would reserve a 2-hour table, and if you get a fugly chick, well you’re stuck in hell for those 2 hours. Lastly, guys usually pay a bit more of the bill.

You have to bother a bro to introduce someone to you. And since you are in the same circle of friends, it’s hard to root and bail.

The cost is the biggest issue. Kyabakura girls are pros at playing with your mind and heart and getting you to spend more money at their bar. The mind games can get tiring and in most cases will never amount to much anyway.

You have to be able to pick up your balls and be good with your words (easy for some, not for others). When you compare the above with an ‘Aiseki-ya’ which requires little preparation, no use of pointless energy, the ability to bail after 30 minutes if you don’t like your match AND only for ¥1500. Meeting Japanese girls seems effortless right? 2. Don’t waste your money and time meeting Japanese girls A continuation from the first point, but when you think about it rationally, the average price of an ‘Aiseki-ya’ is ¥1500 for 30 minutes. When you break it down it is the same price as three ¥500 drinks. The same feeling and amount you would probably spend at a decent izakaya or bar anyway. So it’s like you sitting at a bar sipping on your drink, but just that the staff will roll the girls on in like a conveyor belt. And the best part is that if you get a BOMB of a girl. You can quickly change with no hard feelings. The girls that go to an ‘Aiseki-ya’ will, of course, know the system. If you get them swapped out it's just as easy for them to piss off home or get thrown back on the conveyor belt for the next round of match-ups.

Now What About the Cons?

I am sure this is in everyone’s heads when they go to an ‘Aiseki-ya’.The biggest con is that you just don’t know what kind of girls you will be meeting and matched with. There is always a chance that you will get matched up with a BOMB or BITCH of a girl. Remember, it is completely FREE for girls, so you can end up with the girls who just want to pig out for free, girls that are just there to waste time, girls that are just there to tag along with friends and only want to make new ‘friends’ and so on.

Some types of girls I have encountered

・Freeloading girls that pig out and try to talk you up to pay for the extra charge food ・Unsocial girls that sit and play with their iPhone the whole time ・Lazy girls that just don’t put any effort into carrying the conversation on ・Timewasting girls that keep going to the toilet (Assuming to waste time) In the looks department, just for your reference, on my most recent visits to an Aiseki-ya, I have been matched up with 5 different groups (Different occasions but in total 10 girls). ・3 were fugly/fat ・2 were actually a lot older (couldn’t get the exact age but they looked 40) ・2 were hard metal punk rocker type of girls (Japanese Visual Kei) AND 3 were decent normal girls.

You can see that my odds weren’t exactly the best, but not everyone will have my odds. I have friends that have had incredibly lucky odds. In the end, it is really just like a game of roulette. With it being so easy for any type of person to try, you just have that higher percentage of getting a dud. BUT I still believe there are some hidden gems if you get the right place and the right time. You just have to give it a try yourself. It might not be the right place to be searching for pure true love. But things can start from nothing right? Not to mention... ¥1500 for a chance of meeting a decent chick and the same ¥1500 for a big and fugly chick THAT makes a good story for the bros. No harm in giving it a go right? BUT! If you really want to make that ¥1500 worth every single yen, check out my following post How to Get ONLY Hot Girls at an Aiseki Izakaya for some tested methods to increase your chances of meeting ONLY cuter, hotter and sexier Japanese girls at an Aiseki-ya!
Before

How I Wasted $400 on a Japanese Online Dating Site

5 Things Japanese Girls Do that Will Give You Blue Balls 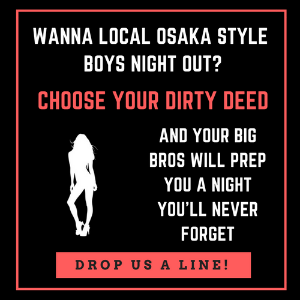